We often have people say things to us like â€œoh wow a photo booth â€“ they really are the latest craze arenâ€™t theyâ€ â€“ and while they are very popular in 2015 did you know they date back a LONG way â€“ a seriously long way! They first hit the world long before Hair dryers, band aids, instant coffee and even before the first plane took off!

To find out where the photo booth journey really starts we need to fly back in time, way back to the year 1888. In 1888 there were two man who were clearly born before their time who first came up with the idea of an automated photography machine. Unfortunately for Mr William Pope and Mr Edward Pope there newly patented invention was never actually made – Â but what a fabulous idea it was and this is where the photo booth story begins.

Fast forward a few years to 1889 and the Paris World Fair and meet another couple of clever thinking gentlemen, Mr T. E. EnjalbertÂ and German PhotographerÂ Mathew Steffens. Now these two were more than just ideas men and they presented the very first working photo booth â€“ which was very cool but unfortunately it wasnâ€™t overly reliable (unlike our VERY reliable Photo Booth Fun booths) so that was really the end of that!

Now if we fast forward another couple of years we meet German inventorÂ Conrad Bernitt and this dude was really onto it. He created the first ever commerciallyÂ successful photo booth, producing ferrotypes, he went on to name this marvelous invention â€œBoscoâ€â€¦I really think it is one cool looking piece of machinery! 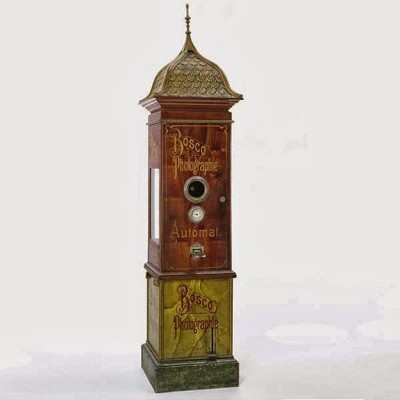 The next clever guy in photo booth history was Carl Sasse who in 1896 thought up and produced the first machine to produce images using the negative and positive process which was a bit of a major and led on to the beginning of the photo booth craze in the 1920s! From that point on photo booths started popping up across the world â€“ providing hours of entertainment for generations!