Posted by David, in Photo Booth

This weekend the Waikato team are supporting a pretty cool localÂ fundraising event – I asked Hazel’s mum Alanna to share some details about Hazel’s charity.

I rescued Hazel when she was three months old from being put to sleep due to her breed.Â  When I adopted Hazel I noticed how many people judged her because of the way she looked and I decided to do something about it.Â  Hazel has taken part in puppy,obedience, advanced tracking and agility classes where people where shocked to see a Pitbull behaving off lead around other dogs and humans.Â  We go to animal events where people get to meet Hazel and judge her for themselves.Â  Hazel is great with animals and people.Â  We go into the local resthome where she gets lots of attention and shows the residents lots of love.Â  Hazel has a Facebook page where we educate people on Pitbulls and show that they can be just like any other breed of dog. Â I believe all dogs should be judged on their behavior and not by their appearance.Â  Hazel also won Service Dog Of The Year through the New Zealand Kennel Clubs Canine Hero Awards in 2015.Â  Along with educating people on pitbulls we fundraise for chosen animal charities and Foster puppies through our Hazel The Pitbull Foster Programme. 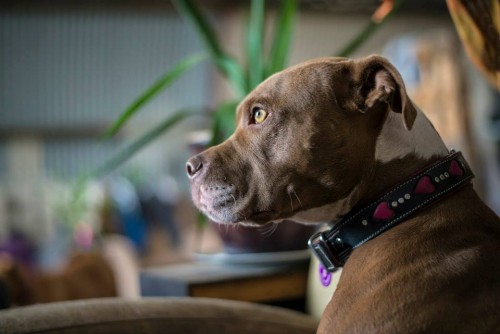 Tickets are sold out for the ‘Hazel The Pitbull Appreciation Day Cocktail Party’ which is taking place on Saturday the 16th of April at The Amabassador in Hamiton but people can still donate to Hazels charity through paypal hazelthepitty@gmail.com.Â  More details at http://www.hazelthepitbull.co.nz.