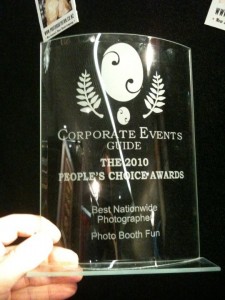 Well one so far, but we don’t plan on stopping there, no sir-ee!

We exhibited last week at the New Zealand Corporate Events Expo and had a great time with loads of people trying out the photo booth we had there.

We love expos as you get to meet so many new people and it’s great to see their reaction to the booths. So many people don’t even know what they are!

Anyway, we were also nominated in the People’s Choice Awards which were held last Thursday in Auckland and apparently we won Best Nationwide Photographer!

I say apparently because we couldn’t make the awards dinner due to bookings but we did receive a nice glass trophy.

It’s now in the office and covered in sticky fingermarks…

Thanks to all who voted and congrats to all the finalists. We hope to keep providing quality services and continue to Bring The Booth!